reflections on “when we are together we can be everywhere” (dir. marit östberg)

Reflections on “when we are together we can be everywhere” (dir. marit östberg) that I could not articulate after the screenings. 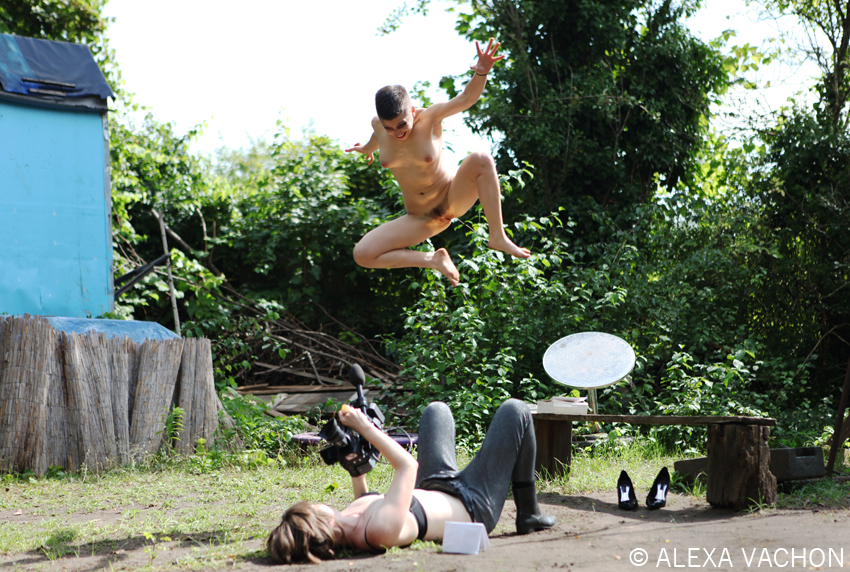 Marit could have chosen not to make this film — and the process would have remained as beautiful in my mind as it was that day in the wagonplatz, lived on forever as memory and wish fulfilled. which speaks a lot about the process and reasons of making porn. It is, in the moment, about the act itself, about full presence, just as any fulfilling sexual encounter is. It is not about watching it years later, or the anticipation of the picture itself, but the pseudo-realities we both set up and enact in the framework of what appears to be almost a child’s game. We see it in our silly smiles, our laughter, the permission we give each other. The boundaries to encounter that we choose to cross—boundaries that perhaps, on another day, we might not have crossed if it weren’t for this framework.

And yet she did make the film, which was a process I cannot speak to, except for knowing its tremendous outcome and felt impact. One where in which she was able to capture precisely what the memory evokes, as well as its fragility. She was able to capture the slipperiness of our time … the way that a thousand lives, a million encounters, could have been chosen, can be chosen still, have been chosen, to live out. And yet how we cannot choose to live all of them, in all time, given the limit of time.

And still, of course, the choice(s) are not perfect, as neither is the community, both felt and not felt. Marit captures this; a community which both exists and does not exist. Not only literally, because it is transient and fleeting, but in its imagined perfection. Because, at end, it is built by creatures–wildly passionate dreamers, utopian visionaries, and depressive misanthropes and socially awkward misfits. At least, I always thought, berlin attracted this.

Perhaps for this reason as well among some we chose porn. Here we can enact dreams; it can push as to create realities, if only for a day. We enact a polyamory that is less complicated than years of work. And we can show on screen something that we believe: that we are not a community who has illusions of looking for a one-fit glove that fits us today and forever and for all time. But rather here we present the sliding doors of time. It could have been this partner or that. It could have been this home or that. This one could have been the long term love, or that one. But she or he was not, but could be. Could be still.

I think this is what brought for me so many tears, this kind of frustration of time. That I have to always choose. That I could be living in a wagon with Paula but in fact I am not. But not the mere fact of not living with her only specifically, but rather what this says, in a larger sense, about the limitations of all the dreams and identities I want to live out.