Two things. one — although “products” or “works” may arrive on one date, their process is much longer. Columns began with a recording that took place in 2015, though one could argue that the process to get to that point took much longer. Many things have been part of why its arrival as “product” took so long, parenting being one of them, lack of money for works being another. two — Although I love the process of composing, I’m often “over” my own tracks by the time they come out, or they have lost something of the visceral first feelings I have when first interacting with their elements. Columns, however, continues to move and frighten me at the same time, even some years after its inception. I can still hear the real terror, anguish, mourning, anger, sadness and violence that penetrate our vocal samples. We were just coming back from spending time in some temporary camps along the so-called Balkan Route in 2016 and I was carrying a lot of confusion and anger about what was happening to asylum seekers who were trying to make it into the EU: those who qualified for asylum but had to travel through a variety of dangerous passages to get to the EU; those who travelled and didn’t qualify; those who were stuck at various transit points and border controls; those who were pulled off trains right in front of me; those who couldn’t make it on trains at all, and others. I felt powerless to “do” anything about it and mostly angry at the asinine “system” that had been set up and was being consented to by the European Union and its residents. This is a brief summary of our personal context in which we recorded vocals in Poland, along with some percussive samples we made on the walls of the cave.

One of the more valuable processes which has emerged out of the Foreign Bodies Project has been the careful naming of the concentric circles of context that surround any field recording. Concentric rings of context surround any subject of field recording; recording or platforming that subject brings that already intersectional body (whether it be a human voice, an animal, wind through trees, metal scraping or something else) into focus. The subject is, essentially, placed on a stage—or rather, a stage is drawn around his or her home—and it is given a microphone. It holds the mic and is amplified – it is asked to speak. It is brought into subjectivity, and by virtue of being amplified, it is listened to. It speaks (or moans, or clangs, or scratches, or hums) as an intersectional body (a body affected uniquely by race, gender, class, education, and a host of other things) and it speaks as a body who is affected by being on “stage”, a word which I would like to propose to use interchangeably with “home”–albeit temporary—in that particular location in time and space where it has been encountered by the person offering the microphone. And the person offering the microphone—all of those same dynamics apply to herm, thus making the process a unique dialogue and interaction between the bodies, energies, matter and sentient beings participating in this wonderful process of field recording.

As a listener, we may understand intrinsically that music contains depths (in fact I am quite sure that we can identify, energetically, that depths of emotion are contained in music). We may assume that we are hearing all these intersections and contexts that are contained in music; we may feel it, but we seldom know the details of their actual stories. These stories and details are important to us HYENAZ to remember. We have dedicated a lot of time to remembering and recording when and where our field recordings have been made; we have mapped them each, one by one: from who or what they emanated and where that body, wind, plant, mineral, person, was located. As we shift, modify and manipulate them, they lose some if not all of the auditory imprint of their origin; but they still are made of the same energetic and emotional fibers. It is up to us to remember them, to name them, and to honour them.

And what were the concentric circles of context that surrounded the subject? The context starts small and immediate, and, through the concentric rings, grows larger to accept and acknowledge larger and more prominent forces which may be operating and touching the subject from a much larger distance.

In the case of COLUMNS, it is important for us to think about the fact that we were gathered together—four people—in ancient caves located outside of Częstochowa, Poland. We had to search to find a cave, guided by knowledge that Bart knew because he had dedicated time to finding them in the past, had spent time in the forest surrounding his home. We hiked to places where the bumps of leaves were conspicuously high and we crept into a dark opening, trusting ourselves to make it through the narrow parts to emerge into wide and tall caverns where we would record in pitch blackness. It was there that we began to allow whatever sounds emerged from our bodies in that context to illuminate themselves. It was the context of darkness, complete lack of sight; it was the context of Bart playing the saxophone. It was the context of coldness, shivering cold. It was the context of warm summer in Poland and isolation of us four bodies in this cavern in a cave. It was the context of our privilege to travel there un-apprehended and to bring with us recording equipment which Bart had worked tirelessly to acquire by dedicating his full passion and whole life to sound. It was our choice to be musicians and to spend our time in that way and to make sacrifices to living and working as musicians; it was the privilege and desire to make that choice.

The caves themselves have a historical context; they were places where travellers might stop on an ancient journey and sleep with their animals by night, they were homes and refuge. Numerous archaeological discoveries have been made in the caves of the area. The next circle of context was the forest itself, a large and very old wood, the kind of wood that one feels is magical and where the trees contain knowledge that most of us cannot access but feel; the kind of forest that we must work to protect. And through this forest, at this very moment in time in which the recording was made, rows and rows of pilgrims marched quietly to the cathedral at the holy catholic church of Częstochowa to see the Black Madonna, the blessed virgin Mary icon at Jasna Góra Monastery. 100,000 pilgrims make this journey every year from all over the world. I do not know these pilgrims and I do not pretend to know what they are seeking. The song is not about them, and it is not about Christianity, or the power of Christianity to inspire thousands of people to march in peace or in violence. And yet of course the track is affected by that marching, those thousands of feet marching through this soft forest floor and other roads that they have travelled. The recording is affected as well by nation of state of Poland, within but at the margins of the European Union. How does the relationship between center and margin consent to the constant creation and re-creation of space between center and furthest margin? How are these margins constantly re-negotiatied, and how does the center dictate what the margins must do in order to be allowed into the center and seen as Subjects. How does this affect migration and who is in the end responsible for policing the migration, a policing that the center demands?

When we get back home to Berlin we stand in line at the Ausländerbehorde; several long lines of mostly brown bodies beginning to queue at 05:30 in the morning. I cannot ignore the fact that there is, conspicuously, one white American man heading the line. We think about the ways that lines manage bodies. Bodies forced to wait for numbers. To get a number in order to take another number. Bodies managed and controlled into long thin lines to maintain order. The order must be maintained for them to be “heard”, their cases adjudicated, their admittance or their denial to pass, to transit, to live. And we think back to the transit center in Serbia where we had volunteered, whose visitors were attempting to simply travel through and onwards though they had dodged bullets to get there. We think to the camp in Šid, Serbia where the Sri Lankans could neither go forward into Croatia nor go backwards. The stucked-ness of bodies who are forcibly managed. These are all unique and individual bodies who, like ours, are entangled in something much bigger and more violent.

These are just some circles of context that surround this track. 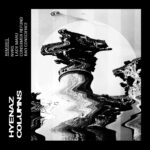 The new single Columns by Berlin performance duo HYENAZ is out on the Canadian techno label OBSKUR MUSIC. The track, which sounds like industrial techno, is built entirely from vocalizations and organic percussion scavenged deep within a cave outside the pilgrimage town of Częstochowa, Poland.

The lyrics and guttural iterations that were originally improvised in the cave session are a response to militarized violence and to History, specifically the historicising mode which focuses on events and important persona, while blurring events and persona deemed unimportant or inconsequential.

Conceptually, Columns falls within a larger body of work HYENAZ have been conducting for the past five years entitled Foreign Bodies. This series of a/v works emerge from the sonic shapeshifting of field recordings gathered in refugee camps, migrant transit centers, ancient stations on paths of pilgrimage, indigenous grounds, and intentional communities. These are all places where bodies have been treated as “foreign objects” to be managed, controlled, feared and annihilated. Each piece acts as a conceptual response or intervention and has manifested as audio tracks, essays, performances and video works.

The video for Columns was created in collaboration with Xenia Ramm and Old Erik from the Hackstage artist collective in Denmark. Xenia and Erik used analogue video processing to deconstruct footage of caves, stalactites, trees and wind turbines that HYENAZ collected in the Harz Mountains. It premiered on Berlin in Stereo.